For the second installment of my legal series, I’d like to explore a formal Japanese administrative document that I have translated many times, which has no direct equivalent in either the USA or the UK. While such official paperwork may seem trivial and perhaps on the cusp of what’s considered “legal” documentation, it plays an important role in documenting who is in the in-group and who is an outsider, who gets rights and who doesn’t. It’s an imperative document with a rich history and some serious issues for those outside of mainstream society.

From birth to marriage, from giving birth to death, the Family Registry (Koseki 戸籍 in Japanese) records all of this information. The Family Registry functions as an official birth certificate, certification of citizenship, death certificate, marriage license, and a census, which are compiled into a one- to two-page document and is kept at regional public offices. The Family Registry is filed under the name of the “head of the household” and is required to be updated after various life changes: marriage, birth, adoption, divorce, and death. This information is updated by submitting the following forms to the municipality in which one’s family register is located: Registration of Birth (Shussei Todoke 出生届), Marriage Certificate (Konin Todoke婚姻届), Divorce Registration (Rikon Todoke 離婚届), and Death Certificate (Shibou Todoke 死亡届).

Due to how imperative this document is for Japanese national identity, the translation of this form as well as other documentation may be required for divorce hearings between a Japanese national and foreigner, any major life event that happened outside of Japan, for a Japanese person living abroad to receive an inheritance, and to submit identification information to a foreign government (for example for Japanese nationals living in the US). The relevant law presiding over this short, but important document is the Family Register Act (Koseki-hou 戸籍法), established in 1947; and Article 13 details exactly what must be included in the Family Registry.

第十三条 戸籍には、本籍の外、戸籍内の各人について、左の事項を記載しなければならない。
Article 13 In addition to the registered domicile, the following matters shall be entered in a family register for each person in the family register:
一 氏名
(i) his/her name;
二 出生の年月日
(ii) his/her date of birth;
三 戸籍に入つた原因及び年月日
(iii) the cause and date of his/her entry in the family register;
四 実父母の氏名及び実父母との続柄
(iv) the names of his/her natural parents and his/her relationship with his/her natural parents;
五 養子であるときは、養親の氏名及び養親との続柄
(v) in the case of an adopted child, the name(s) of his/her adoptive parent(s) and his/her relationship with his/her adoptive parent(s);
六 夫婦については、夫又は妻である旨
(vi) for a husband and wife, a statement that they are husband and wife;
七 他の戸籍から入つた者については、その戸籍の表示
(vii) for a person whose name has been moved from another family register, reference to the former family register; and
八 その他法務省令で定める事項
(viii) other matters specified by Ordinance of the Ministry of Justice.
Family Register Act Article 13 from Japanese Law Translation 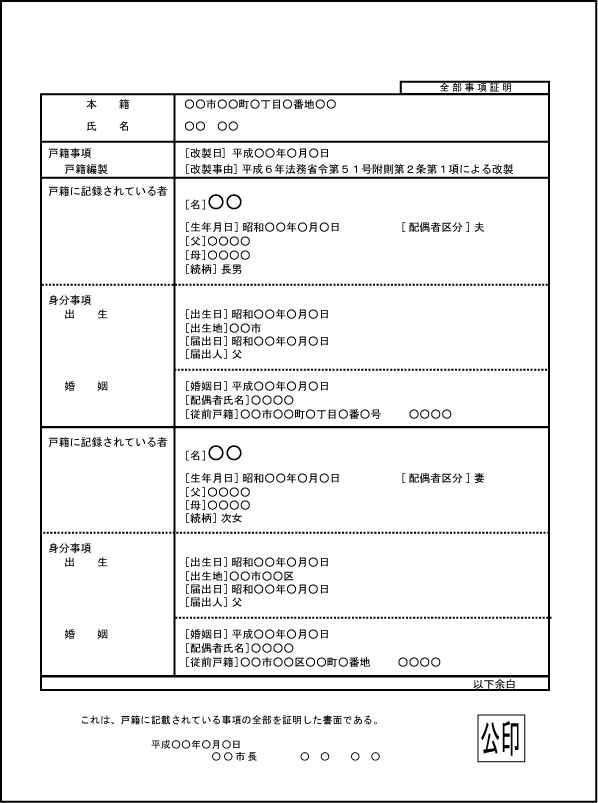 Origins of the Family Registry

While the laws presiding over the Family Registry are from the post-war era, this document detailing all of Japanese citizenry  — as seen in the example above — first came out during the Meiji Restoration in 1872 and for the first time required all Japanese citizens to have surnames. Prior to this during the Bakufu (a period of military government led by the Shogunate from 1192 to 1868) there were four documents to record the population: Registry of Human Categories (Ninbetsuchō 人別帳), Religious Inquisition Registry (Shūmon jinbetsu aratamechō 宗門人別改帳), Five Household Registry (Gonin gumichō 五人組帳) , and the Death Registry (Kakochō 過去帳). Under these systems, certain social outcasts such as the Burakumin, who are a group in Japan that has been historically discriminated against due to the occupation and identity of their ancestors, were excluded from this registration. Unfortunately the modern Family Registry has not completely shaken this history and has been accused of blatant discrimination.

According to Colin Jones, a professor at Doshisha Law School, in his article “Japan’s discriminatory koseki registry system looks ever more outdated”, this system legitimizes and even to some extent mandates discrimination against outsiders. He details that one group of outsiders of this system is the imperial family who is registered in the Imperial Family Register (Koutoufu 皇統譜) and any princess who marries an outsider becomes a “commoner” who is removed from the family register and added to the Koseki system.

Another group of outsiders are called Mukosekisha (無戸籍者) or people with no Family Registry. There are many issues for children whose parents are unknown, children born abroad whose parents didn’t register them within 3 months, and children through artificial insemination or surrogacy. In one episode of the radio podcast series 弁護士の放課後 ほな行こか〜 (After School with Lawyers Let’s get a move on!), which interviews members of the Osaka Bar Association, a family lawyer details why Japanese parents should register their unregistered children and that there are no penalties for doing it late. Some of these children are unregistered because their mother or parents didn’t want to be found (potentially due to domestic abuse) or there were other life circumstances which prevented registration and are hesitant to see a lawyer for fear of being judged. However, as the special speaker mentioned, most lawyers won’t lecture you for this, if they do then you can switch to a different one, and even if it’s last minute parents should register their children as it will be hard for them to function in society, register for school, or get a job when they grow up.

The final group that Colin Jones identifies are ethnic Koreans in Japan and foreigners in Japan, as the system itself is linked to nationality and one must be connected to a Family Registry to be naturalized as a Japanese citizen, which can mean a foreign spouse being added to their Japanese partner’s family registry. (In the pre-war version of the Family Register, Japanese citizens who married a foreigner were removed from the registry and foreign spouses were barred from being part of the registry.)

Attempting to Change an Arcane System

I would be remiss in not mentioning challenges to the Family Register system to address inherent discriminatory issues.  After all, laws and policies are not static and can sometimes be amended, even if it takes time to chip away at it.

In the case of the Family Registry Act, the one notable amendment is the 2003 Gender Identity Disorder (GID) Act which states that with the letter of support from two psychiatrists, someone can change their gender listed on the Family Registry. Same-sex marriage has not been legalized in Japan, however with the Family Registry system, same-sex couples can use the “adult adoption” to adopt one partner into the other’s Family Registry to gain legal visiting rights for medical treatment and family inheritance. However, adoption is not allowed for a person of “old age”.

Prior to the 1980s, the Nationality Law (Kokusekihou 国籍法) only allowed Japanese males to pass on “Japanese” nationality in the case of a union with a foreign partner, yet with the 1985 adoption of the Convention on Elimination of All Forms of Discrimination Against Women allowed a woman to pass her nationality onto children born from foreign spouses. Due to the fact that the fathers must “recognize” their paternity of their children it has been hard for foreign women to claim Japanese nationality for their children, yet with the 2008 Supreme court ruling that the Nationality Law provision on illegitimate children was unconstitutional, the father can retroactively recognize paternity even after birth. In 2015, a case arguing that the Family Registry’s requirement for married couples to have the same name is a form of discrimination against women, yet the Supreme Court upheld this provision.

The Family Registry system has been accused of being arcane and a legal form of upholding discrimination, which no longer represents what the modern Japanese family looks like. In 2017, the Ministry of Justice has suggested replacing the Family Registry system with the My Number System used for the tax and social insurance system. Perhaps over time this seemingly unchanging document and the almost unchanging Family Registry Act will too be affected by the winds of change and find space for those in Japan who have been deemed “outsiders” to it. Yet in the meantime it’s important for legal professionals and translators who deal with such documents alike to understand the Family Registry system and the laws underpinning it.

View all posts by lathamsprinkle

Connect with me on LinkedIn